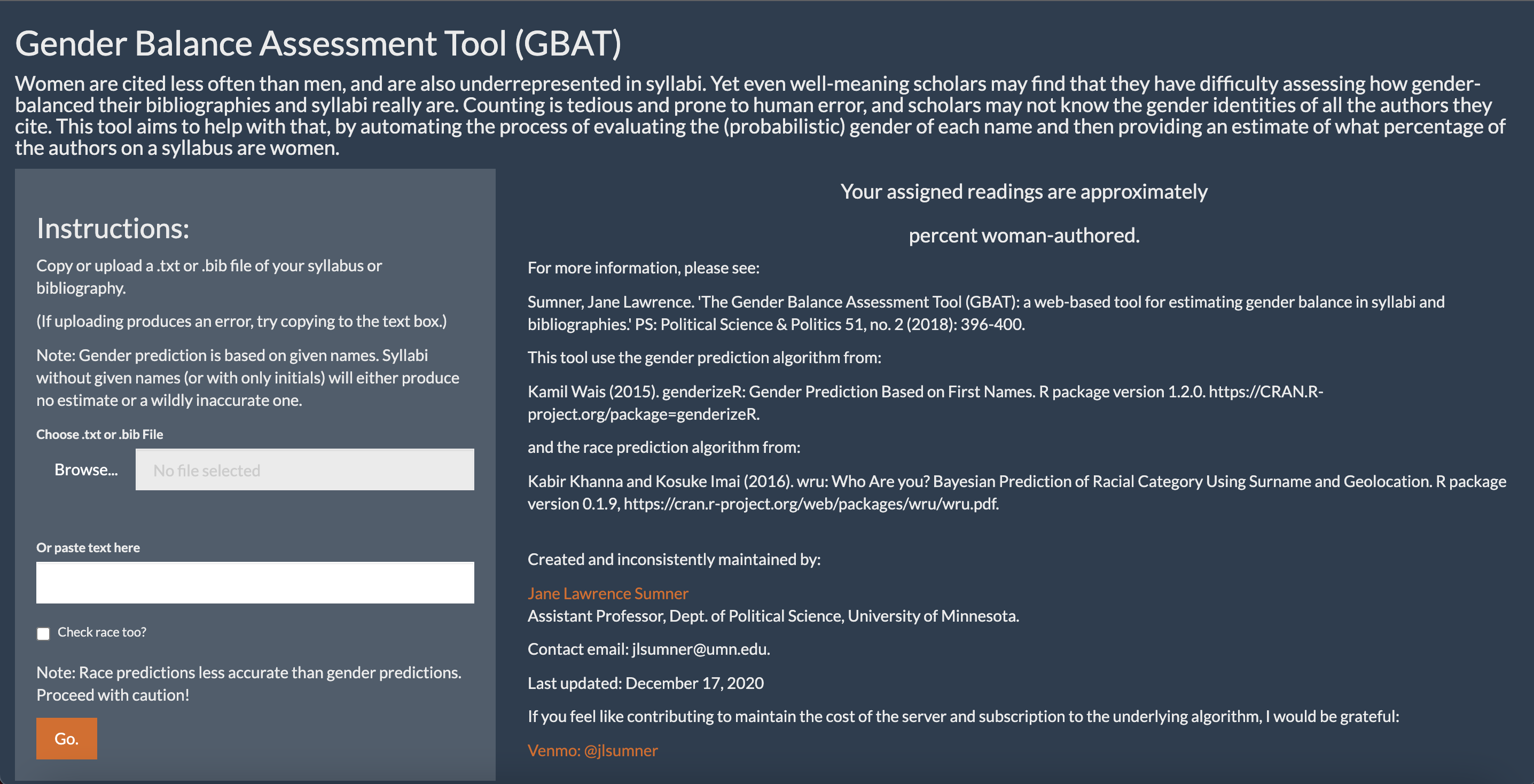 Lehigh’s Department of Political Science uses a resource on diversity, equity and inclusion called the Gender Balance Assessment Tool (GBAT). The ministry is currently in the process of establishing a committee for the development of DCI initiatives.

The GBAT, created by Jane Sumner, a professor at the University of Minnesota Twin Cities, detects author names in a program and executes them through two different algorithms, one for gender and one for race.

Sumner developed the system in the spring of 2016 at Emory University.

Sumner said the purpose of this tool is to ensure gender diversity among readings for a given program. She said it was a web-based tool that is used to help academics assess gender balance in their curricula and bibliographies.

“Because researchers tend to cite, at least initially, work assigned to them in courses, the gender gap in citation is exacerbated by under-assignment in programs,” Sumner said.

Associate professor of political science Holona Ochs said the GBAT tool checks for gender diversity and racial diversity, but they are blunt instruments.

“Gender is a spectrum and racial identities are complex and multifaceted,” Ochs said.

Ochs said she encouraged her colleagues to use Sumner’s tool, although no one is required to. She said she hopes it will become standard practice.

Sumner said she was determined to raise awareness of the gender gap that is often overlooked in academia.

“The goal is to make assessing gender diversity so easy and quick that more academics will do it,” Sumner said.

Associate professor of political science Nandini Deo said that several faculty members from the political science department have expressed interest in forming a DCI committee. This committee would determine the best inclusion practices and how to apply them in the classroom.

Deo said the department has discussed the process of selecting more diverse readings for their programs. She said they were focused on creating more variety in the readings they selected, while prioritizing racial, gender and country diversity.

“I organized a workshop for the professors in the department,” Deo said. “A lot of what we talked about was how to select more diverse readings and texts, both in terms of gender, race and different parts of the world. “

Anthony DiMaggio, associate professor of political science, said integrating the GBAT tool into the political science curriculum would be a good starting point to improve the diversity of readings in the curricula.

“This database would be useful for starting a conversation, but it can’t be the end point,” DiMaggio said. “It must be deeper than the race and gender of the perpetrators. We also need to look at the content.

Ochs said many universities are implementing DCI initiatives in their degree programs, and she believes Lehigh is behind schedule.

She said DCI concepts will continue to be undervalued until faculty are systematically assessed on these criteria.

Sumner said his GBAT tool has received negative reactions over the years, including hate mail sent to his office.

She said the majority of the hate messages she received came from people claiming that she was trying to eliminate white men from academia.

Sumner said the GBAT system was also receiving positive feedback and had received suggestions on how to improve it.