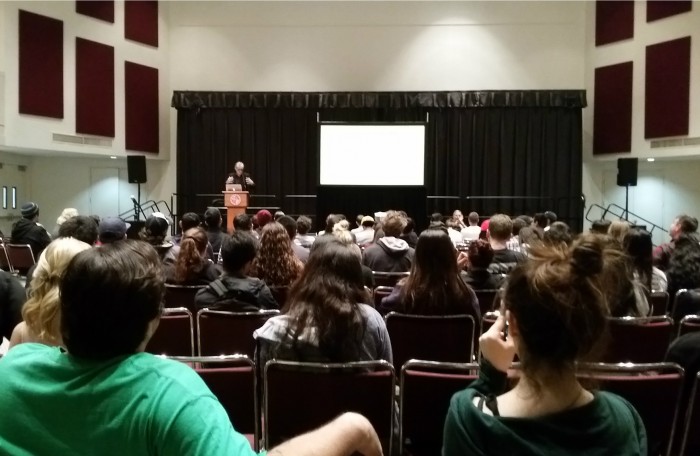 American Buddhist writer and educator, Robert Thurman, spoke to a packed house of students and faculty about how Buddha was first and foremost a scientist, despite popular belief.

Thurman gave a lecture today at the South Valley Center of the University Students’ Union wearing his sunglasses for over an hour. The conference was sponsored by the Department of Religious Studies.

Thurman is the Jey Tsong Khapa Professor of Indo-Tibetan Buddhist Studies in the Department of Religion at Columbia University and president of the nonprofit organization, Tibet House United States

Thurman was named one of Time magazine’s 25 Most Influential Americans in 1997 and has spent his career as a writer and educator on Tibetan Buddhism, according to Thurmann website.

Thurman highlighted ways to implement Buddhist ideas into our daily lives and how to prioritize needs as humans to be less focused on immediate gratification and more on preserving our planet.

“We have to take responsibility and learn to restrain ourselves,” Thurman said during his talk.

In addition to Buddhist ideas, Thurman explained his views on the current political system and why it is in such bad shape.

“Young people are so disgusted with the political system that they just don’t vote,” Thurman said. “The planet is not impracticable. It is just dominated by reckless materialists.

The media tricks younger generations into believing that our world is unsalvageable, which in turn pushes problems onto the next generation, Thurman explained in his speech.

“I think it’s anachronistic to believe that Buddhism is a science. But it can also be problematic if it’s not seen as primarily a religion,” said Rick Talbott, director of the religious studies department at CSUN. “It is based on mutual respect for human beings and all beings in the world, including animals.”

Although Talbott disagrees with some points raised by Thurman, he believes that Thurman uses his teachings of traditional Buddhist concepts to advocate for a better world.