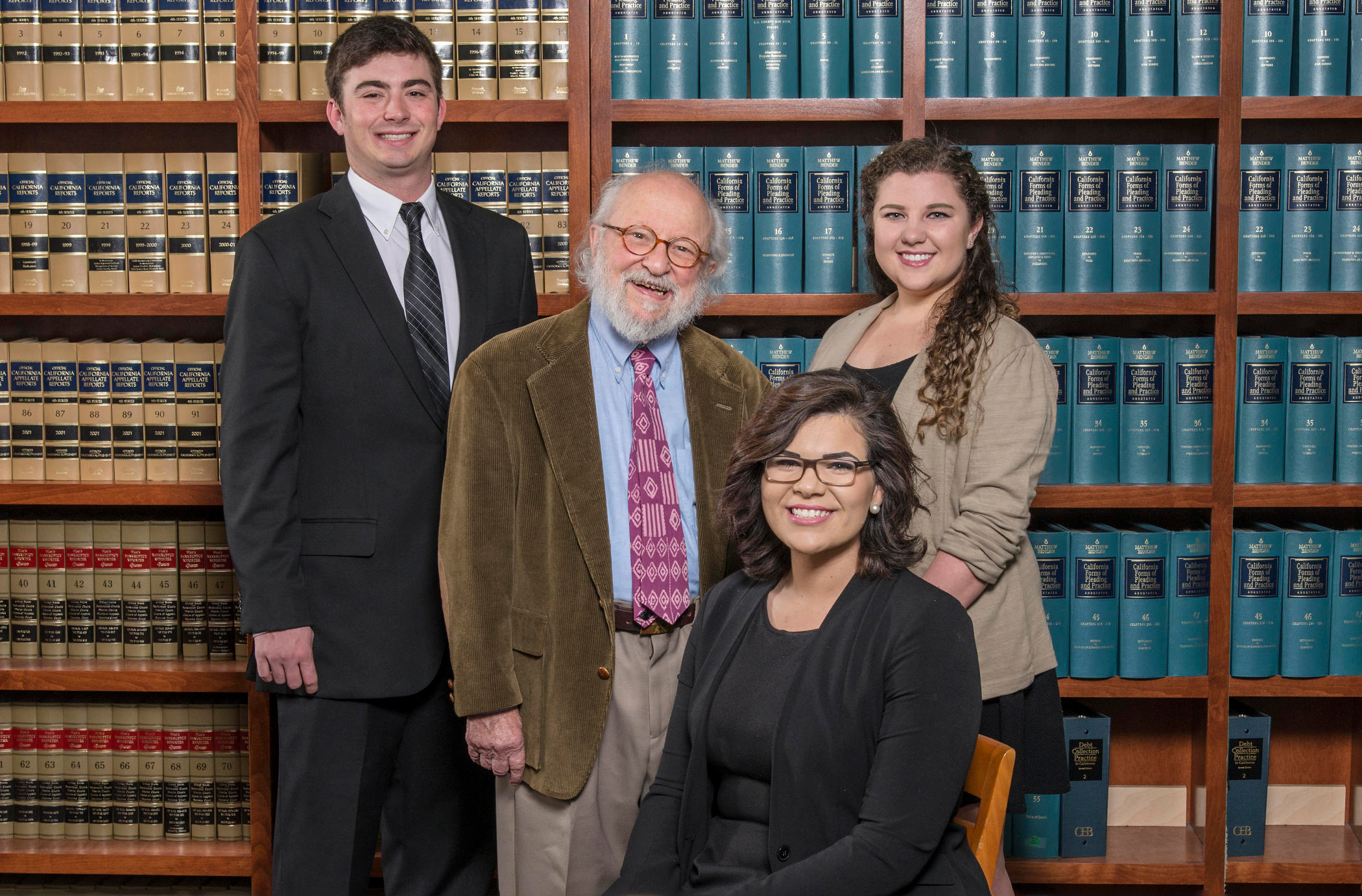 Born May 10, 1930, in Chicago, he served in the Utah National Guard, Air Force, and Virginia National Guard from 1948 to 1955. He later earned his undergraduate and law degrees from the University of Denver and a master’s degree in law from New York University. Later, he earned a doctorate in political science from the University of Colorado at Boulder, at which point he realized that teaching was what really inspired him.

Bronson was hired at Chico State in 1969 as a faculty member of the Department of Political Science. In the same year, he established CLIC, which was the first university legal clinic run by undergraduate students and which remains today the largest, most comprehensive and oldest such clinic in the country. CLIC has hired at least 3,500 student interns over the past five decades, and its students average more than 8,350 public service hours a year providing information and referrals.

Bronson was motivated to found CLIC by the glaring lack of legal representation in the community, especially for low-income or underserved populations. His vision was to bridge the gap with a free legal aid clinic run by political science majors and supervised by expert professors and local lawyers.

“Ed’s philosophy was to provide access to justice and the courts to all individuals, and to instill in all of our students a sense of justice and community service,” said CLIC’s supervising attorney, Sally Anderson (political science, ’94), noting that alumni have gone on to work as lawyers, judges and members of the legislature, and others have started their own nonprofit organizations.

“For so many of his students, he changed the trajectory of what they thought they wanted to do,” she continued. “I think a lot of them went into law with the priority of making a lot of money and that priority shifted to duty to their community and appreciating the ability to help those who are less fortunate and in need.”

Anderson credits Bronson with her own passion for civil rights and civil liberties, and said it gave her the confidence as a student and single mother not to give up on her goal of going to law school.

“My dream job was to come back and work for CLIC because I had seen what he had done, and I wanted to come back and continue that legacy,” she said. “The community depends on it and it has inspired thousands of students.”

Bronson also founded the University’s Public Law Program, Criminal Justice Program, Paralegal Certificate, Pre-Law Society, and Minority Law Student Union. He was honored as a Chico State Outstanding Teacher in 1988 because his colleagues recognized his influence in the classroom as “teaching in the highest sense.” Each year, he took students to visit Folsom and San Quentin State Prisons, as well as law schools.

Outside of Chico State, Bronson was a national expert in areas such as change of venue, pretrial publicity, voir dire, and qualified juries for death. He spent years studying the practice of excluding jurors from jury duty in death penalty cases when they opposed capital punishment. The practice, he said, most often excludes people who are black, young, poor, non-Christian, Democrat and women.

Bronson also qualified as an expert witness in dozens of change of venue hearings in California and in the 1996 Oklahoma City bombing case, where pretrial publicity was so extensive or inflammatory that it made the selection of impartial jurors impossible. He also worked on the Boston Marathon bombing case and advised attorneys on other high-profile cases, such as the murder of Polly Klaas, the Los Angeles County Nightstalker and the serial killer Dorothea Puente. He testified once before the United States Supreme Court. This week, The New York Times published an obituary honoring his legacy and crediting him with improving the impartiality of criminal juries nationwide.

Bronson was also praised for preparing countless students for successful legal careers and working tirelessly to ensure they achieved their goals.

“He was a mentor to me before we got this mandate. He had an amazing ability to spot the qualities of women and people of color who he thought could become lawyers and return to serving communities in need,” said Linda Lofthus (political science, 1974), now a judge in San Joaquin County Superior Court. “Every time I speak to a defendant in police custody, I think of him. “What would Ed say?” How would Ed handle this? It radically changed my life. Not a day goes by that I don’t think of him, and that’s been going on for 50 years.

Throughout Bronson’s life, Lofthus remained close to him, his wife, and their children, viewing them as extended family. After law school, she became an assistant public defender and later worked in private practice, but he always encouraged her to return to criminal work. When she became a judge, he spoke during his swearing in and she often saw him as he testified as an expert in many cases, where he was still highly respected and held in the court. both by the prosecution and the defence.

He also had a global impact, spending the summer of 1978 providing law students at the University of Papua New Guinea with language and legal skills, and winning a Fulbright Award in 1992. He spent that year doing research and lecturing at the University of Lisbon. in Portugal, where he focused on the Portuguese legal system and the impact of its sanctions.

Bronson had a deep commitment to individuals, populations and causes that have traditionally been underrepresented in the justice system. One of his many passions was knowing how the LSAT was a culturally biased testing instrument that favored urban white students, so he guided students locally and in other communities on how to take and pass the review. He also participated in the six-week Legal Education Opportunity summer program which helped underserved students prepare for their law exams.

Todd Machtmes (political science, 1991), executive vice president and general counsel at Salesforce, still remembers a test Bronson gave at the start of his “Civil Rights and Civil Liberties” class. A law school-style essay, it posed a hypothetical question about an individual alleging discrimination, and Machtmes fully answered the question, concluding in favor of the individual. Bronson gave it an F.

“It was the first time someone had pointed out to me that in entering the result that ‘seemed right’, I had completely ignored the logical and legal basis that had been provided to arrive at a different conclusion,” said he declared. “This lesson was a wonderful gift. I then had the honor of being Ed’s teaching assistant the following year. I will be eternally grateful for all the intellectual gifts he gave me, always with kindness and sometimes with a twinkle of mischief in his eye.

Lofthus keeps a photo of Bronson on his desk after one of his many visits, and at the top is recorded a saying: “Time is precious, but truth is more precious than time.”

“It suits him well. He sought the truth for an entire population of underrepresented people by helping motivated students to become the advocates who would work for that truth,” she said. CLICK a few years ago, there was a map of the country with pins in it showing all the communities where its students – now lawyers – all practiced.In almost every state in the Union, there are lawyers who practice what Ed encouraged and influenced in a substantial way.

After retiring from Chico State in 2000, Bronson continued to visit Chico State to speak to students, attend Commencement, and support student civil rights work for inmates at the North Jail. Butte County. He also continued to serve as an expert witness, testifying remotely on his last case in January 2021. Besides watching baseball and cheering on his beloved San Francisco Giants, law and teaching remained his true passions in life until at the very end.

The University flag will be lowered on Tuesday, May 17 in his honor. On-campus service is planned for fall 2022. We will share information when details are available.