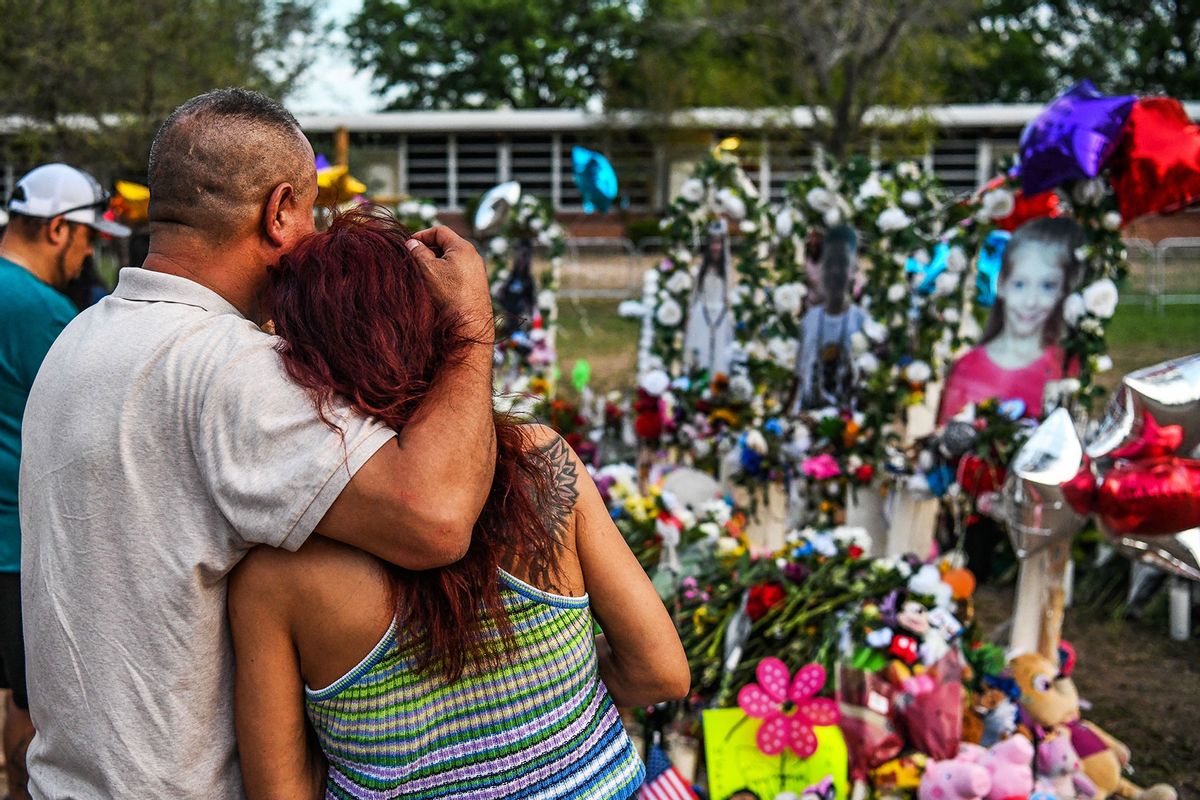 Our national tragedies follow their own bleak script. The unthinkable is happening, yet again: school children are being massacred, this time just a week after a hate outburst at a grocery store. There’s a ritual outpouring of grief and rage, a senator’s helpless anguish goes viral, and that sad title of Onion is brought to light as another community mourns.

Yet our politics remain trapped in a pitiful chorus of Surely now we will act and Sorry, no, nothing to do. Even something as toothless as extensive background checks seems impossible. Stupid ideas like armed guards at the entrance to individual schools are being offered by politicians who apparently have never seen an American high school or a bored mall cop.

Such emptiness and repetition somehow makes those hellish days even more hopeless. A country even a little less broken would not suffer from an epidemic of mass shootings. A less broken political system would at least try to prevent the slaughter of children and teachers from becoming commonplace. Ours can’t even pretend to be serious.

There’s a viral tweet from British journalist Dan Hodges circulating after so many mass shootings that suggests Sandy Hook marked the end of the gun control movement because “once America decided that killing children was bearable, it was over”. This week there were 231,000 likes and 185,000 additional retweets.

The problem is that it’s not exactly that. Voters never decided it was bearable to see children murdered or that nothing could be done. The fundamental problem remains the same: our broken political institutions, in which small minorities exercise veto power over much larger majorities, even when third-graders die.

Voters never decided that it was tolerable to see children murdered or that nothing could be done. It is a function of our broken institutions, in which an increasingly small minority exercises the right of veto.

Our gun nightmare, like so many other national emergencies, has been compounded, and even rendered intractable, by our extreme minority regime crisis. We cannot pass common-sense reforms that bipartisan majorities support because gerrymandering, the filibuster of the Senate, and federal courts filled with conservative ideologues — by presidents who have lost the popular vote — all stand in the way of the will of the people.

Public opinion has been constant for years. The majority of Americans support banning high-capacity ammunition magazines that hold more than 10 rounds. They support banning assault weapons. They support “red flag” laws that would allow a judge to take the guns away from someone who presents a clear risk of violent behavior. They support creating a national gun database, adding background checks for private sales and gun shows, and even raising the age of gun ownership. fire.

But public opinion doesn’t matter. So nothing changes, despite widespread agreement on the way forward, despite the political power of parents shaking and hugging their children tighter in the morning, despite the tears of presidents comforting moms and dads whose children don’t come home not home, despite march after march by teenagers asking for nothing more than to be safe at school.

Want a daily recap of all the news and commentary Salon has to offer? Subscribe to our morning newsletter, Crash Course.

As a result, those in power who are genuinely interested in reform have stopped trying. It is hard to fault them for recognizing the true nature of Sisyphus’ masquerade.

The combination of gerrymandering and filibuster ensured that nothing changed after Sandy Hook. Public support for tougher gun laws jumped to 58% after 28 people died in that mass shooting nearly 10 years ago in Newtown, Connecticut. Yet the wildly gerrymandered House of Representatives, at the time controlled by Republicans opposed to gun control, even though Democratic candidates won 1.4 million more votes, never even considered serious reforms. . The GOP held a 234-201 advantage in Congress due to six states, all of which were carried by Barack Obama and all of which had been redistricted the previous year by Republicans. Those states were Pennsylvania, Ohio, Michigan, Wisconsin, Virginia, and Florida, and collectively they sent 64 Republicans and 30 Democrats to Washington.

The Republican House majority that blocked gun control after Sandy Hook was entirely the result of aggressive GOP redistricting in six states — all won by Barack Obama.

It is absurd and illogical, of course, that Democrat-winning states statewide give nearly two-thirds of their congressional seats to the opposition party. If the delegations from these six blue states had reached exactly the same level, 50/50, the result would have been a Democratic majority of 218-217. So the supposed “bipartisan compromise” on universal background checks that emerged after Sandy Hook had to start in the Democratic-controlled Senate, where the bill, sponsored by Sense. Joe Manchin, DW.Va. and Pat Toomey, R-Pa., was, predictably, suffocated by the filibuster.

Ronald Brownstein, then at the Los Angeles Times, count the number of people represented by 54 votes in favor of the bill and 46 against. The 54 senators who voted yes represented 194 million people. The 46 who blocked the counterparty accounted for 118 million.

The Senate filibuster—used for decades after the Civil War to stop civil rights legislation, then turned into a powerful filibuster by Mitch McConnell—allows any senator to delay a vote with even the threat of hold the floor indefinitely, and requires an insurmountable supermajority of 60 votes to break.

The basic arithmetic of the US Senate has changed little since then, and it would be foolish to imagine that today’s chambers, increasingly polarized, gerrymandered and geographically sorted, are more capable of reflecting the nation. Nobody really believes that the Senate can or will do much. Democrats have refused to remove the filibuster because two of their members, in a pseudo-50-seat majority, insist on keeping it. Nothing can pass in this environment.

Smaller, whiter, more rural states — which are far more likely to vote Republican and oppose gun reforms — have an effective veto over any legislation. The 50 Democrats in the current Senate represent 41 million more people than the 50 Republicans. As Senator Angus King of Maine noted during the debate on expanding voting rights earlier this year – also blocked by the filibuster – 41 senators representing just 24% of the country’s population can block almost anything. what they want. (And of course, an illegitimate and radicalized US Supreme Court majority could soon prevent states or localities from enforcing their own gun laws.)

Of course, it’s not just about guns. This minority power crisis that plagues all levels of our politics helps explain why extreme anti-abortion laws proliferate even when majorities oppose them almost everywhere. This explains the failure of the suffrage legislation that Americans supported in large numbers. It explains one or a deadly paralysis on climate change, which literally endangers the future of our planet. The problem is only getting worse. This is how democracies atrophy and institutions crumble. Americans demand action, we know our political system is incapable of providing it, and incapable of doing much, even when children are being slaughtered in their classrooms.

The Democrats’ options are clear enough: drop the filibuster, restructure the Senate to be fairer, find a way to win 60 seats — or rage and whine needlessly, choosing helplessness.

A recent opinion piece in Reason Review suggested that Democrats use the filibuster as a scapegoat instead of confronting their own inaction, and while the argument carries a whiff of bad faith – please democrats reveal your helplessness on more issues frustrate majorities even more often – there is an important kernel of truth here. This minority veto power gets in the way of any progressive priority, and it’s not going away. The options are pretty clear: change the rules, build support for restructuring the Senate to make it fairer and more representative, find a way to get a 60-seat majority – or rage unnecessarily, having chosen the incapacity.

The Senate may have been designed to be a cooling “saucer” that slows down political action, but it was not meant to make all action impossible. Our national crises continue to worsen. Our political institutions leave us no choice but to bury the dead and wait for the next crippling catastrophe. We are broken and almost beyond repair. We the people are armed. And a small faction of our people has also armed our political institutions against us.

Read more from David Daley on the failure of democracy: